Recent Washington Post and ABC-7 coverage noting GPSA's concern about the lack of certainty regarding transition and relocation plans for liveaboards at the Gangplank Marina seem to have been noted by the Southwest Waterfront development project planners. At last night's public unveiling of the SW Waterfreont Master Plan for Development, GPSA slipholders turned out in large numbers at the beautiful new Arena Stage theater to hear directly from the development team about the future of the SW waterfront. Of special note for GPSA members last night was Master Developer Monty Hoffman's answer to a question regarding plans for liveaboards at the Gangplank Marina.

In direct response to questions from audience members about the future of the vibrant community at the Gangplank Marina, Monty Hoffman said the following:

1) The current number of liveaboards at Gangplank Marina will not decrease during or after the master plan is implemented. In fact, the number could potentially increase. Also there is a new Gangplank Marina in the master plan with the same number of slips as Gangplank currently offers.
2) Monty Hoffman is dedicated to keeping liveaboard boaters in the SW during the transition.
3) The new development will not only be for mega-yachts. The marinas will be diverse, just like the District.

Many of us also spoke with Robert Sloop from Moffatt & Nichol. Mr. Sloop is a Senior Coastal/Waterfront Project Manager, and will be tasked with creating transition plans for Gangplank Marina. Initial plans seem to have been crafted, although we have not yet seen anything in writing. We will plan to engage Mr. Sloop in the near future as the developers contact GPSA regarding more specific transition plans.

There is considerable excitement about the possibilities the proposed future development holds. The new waterfront promises to be a place of vibrant commercial, retail and residential activity. The developers envision creating a 'world class marina' that will attract Washington DC residents and visitors to the water as a major destination. Thank you to everyone who came out to the meeting last night, and also thanks to those who helped to get the word out regarding our concerns. The website for the development project is likely to have more answers to community members' questions as well as more detailed plans in the near future.
on September 30, 2010

There was a great write up by Derek Kravitz on the plight of the community that resides at Gangplank Marina. If you didn't already see the article, you can find it here (Murky waters for D.C.'s 'boat people').

Also, please be sure to read the recent WP articles on future SW development that I have linked to below:

As it redevelops Southwest, the District should follow the lead of Arena Stage

Be Sure to Attend the Upcoming Southwest Waterfront Community Forum 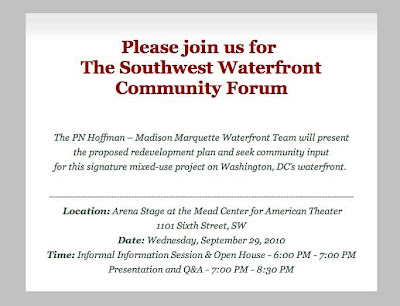 Please find an analysis of the most recent Ward 6 debate by Brad Soule, one of our very dedicated community members.

On Thursday August 26, I, along with around 125 to 150 other residents of the Southwest Waterfront and Ward 6 attended a debate for the Ward 6 Council seat between incumbent Tommy Wells and former-Williams aide Kelvin Robinson. The debate was very civil and the range of topics covered gave an excellent idea of where the candidates stand and what they see as their key issues. For Tommy Wells, this is walkable and livable communities, for Kelvin Robinson, this is juvenile crime.

For the record, I will not be voting in this election and am not a partisan for either candidate. As an active duty member of the armed forces, I mtaintain my voting registration in the other Washington (state). However, this does not mean I, along with other members of the armed forces, are not interested in participating in local issues where we live or developing an opinion on the candidates we feel would best represent our current home. The summaries below are my best attempt to provide a fair and complete summary of the responses of both candidates.

I will briefly touch on each topic and question that was covered. If anyone else who was there believes I have misrepresented or not properly emphasized a point of contention, please chime up in the comments!

Gay marriage - Tommy Wells gave a full defense of DC's new gay marriage law and said that DC must stand up to defend this right against political attacks. Kelvin Robinson said that he fully supported "equal rights". When the moderators asked him again directly whether he supported the bill which Tommy Wells had voted for, he side stepped the question and reiterated his commitment to "equal rights".

The Shuttlebug - This was probably the biggest different between the two candidates. Kelvin Robinson claimed that after speaking with residents of the affected neighborhood, he felt the free service should be funded by the DC government in perpetuity because of issues with crime around the new Waterfront Station development at 4th and M SW. Tommy Wells defended his position that the need for the shuttle (the closure of 4th st. between M & I st SW during construction of Waterfront Station) had been resolved. He also voiced concern that if DC funded this special program, other neighborhoods would hold it up as an example for why they should get a similar service that the city could not afford.

LEED certification - When asked about requiring that new developments meet minimum standards for LEED certification, Tommy Wells said that he did not feel that this was appropriate because he felt that the minimum required standard ought to be at least Gold or Silver certification. Kelvin Robinson answered second and voiced support for this position but did not elaborate. In research afterward, I found that DC has already enacted a requirement for LEED certification for nonresidential projects in 2008, but neither candidate addressed this in the answer. I am not familiar with the DC requirements so I welcome anyone to contribute with more on the existing requirement and any solid proposals beyond the off-the-cuff from the candidates at this debate.

Bag tax - Mr. Robinson questioned the value of the tax on plastic bags and felt the Council's efforts could have been better spent elsewhere. Council-member Wells countered that the tax had done its intended purpose and reduced trash in the Anacostia River.

DC General as a homeless shelter - Mr. Robinson voiced disgust with the conditions at DC General and said that it was in no way fit to be used as a homeless shelter. He held Tommy Wells responsible for this issue due to his role as the chair of the Human Services Committee.  Tommy Wells defended his record as head of the Human Services and took credit for helping to reduce the number of chronically homeless in the city. He also made a comment along the lines of housing more people on a smaller budget at DC General that one of the moderators followed up on. The moderator asked specifically why the Council-member was taking credit for a reduced budget and more people in DC General given the deplorable conditions, but Council-member Wells did not give a clear response except to refer to his record on the Human Services Committee.

Streetcars - A question on streetcars from the audience was framed as a question of the need for so much redundancy within the system. Specifically, why do we need Ciculator, Metro rail and bus, as well as streetcars on what seem like the same routes? Tommy Wells answered first framed his response as one of capacity. He stated that you could move 160 people in a streetcar but only 60 in a bus so it would behoove the city to develop capacity along its busiest routes. Additionally he pointed out that the expected population growth in Southwest using only car based development would kill the character of the neighborhood and require greatly expanded road capacity. Kelvin Robinson passed on the question.

Waterfront redevelopment - There was around 20 people representing the live-aboard contingent at Gangplank marina (of which I am a part) several of whom asked questions about the pending redevelopment of the Southwest Waterfront and voicing concern that this would negatively impact the liveaboard community and restrict access of the less affluent to any newly constructed marina facilities. Both candidates voiced concern for preserving the unique character of the waterfront community, but Tommy Wells took care to emphasize that this does not mean he was against he redevelopment. He specifically stated that while he was concerned with preserving the community, this does not mean that the marinas would not end up in a different place.

After about two hours of moderated & audience questions, the themes the candidates wanted to emphasize were readily apparent. For Kelvin Robinson, it was juvenile crime. To Mr. Robinson, people don't feel safe in their neighborhoods and the problem is juvenile crime. This should be the primary focus. For the incumbent, Tommy Wells, the focus appeared to be on his record. Oddly enough, I do not think he said the words "walkable" and "livable" more than a couple of times, event though they are his campaign slogan. Instead, he focused on his history in the Ward and his record of constituent services. Overall, both candidates as well as the audience were extremely civil and cordial with only a couple minor zingers between the candidates.
on September 09, 2010

Email ThisBlogThis!Share to TwitterShare to FacebookShare to Pinterest
Please be sure to support the awesome effort that has been put forth to create 7th Street Landing. We look forward to seeing you at some of the events. 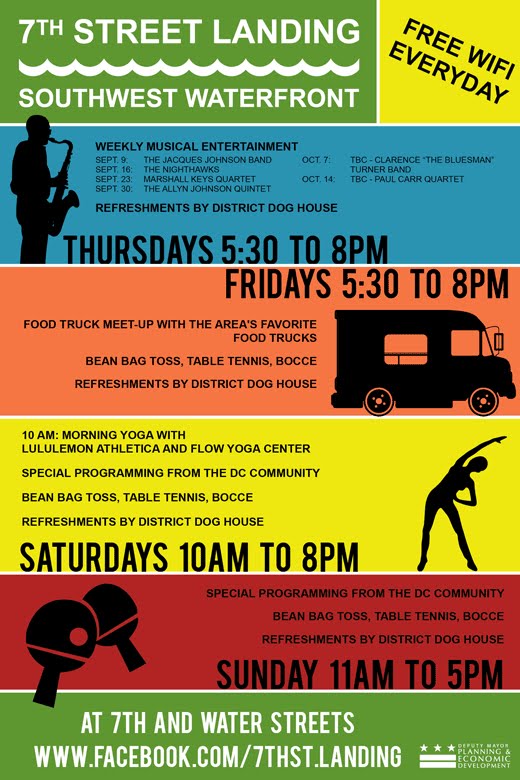